Be careful what you wish for

2020 continues to show a crude humor, when it comes to wishes fulfilled and ever so often I am reminded of the story of the monkey paw,.
Thus I have become very careful.

I clearly remember thinking that I would like to have more time to myself and not having to meet so many people (which is nice, but can become too much easily, too) . Enter covid-19, wish granted.
Apart from neighbors, whom I greet from the balcony or the terrace @thepalais, the only people I have seen in the last four months have been Kim and Jenny.
This situation comes in the combination with ‚I shouldn’t attend that many concerts‘, which worked perfectly for ‚Lost Evenings‘ with Frank Turner in Berlin, Bright Eyes in Frankfurt and so on…
‚Lost evenings‘ though… this one really makes me sad, most likely an event like that in that place will not come again…

Back to wishes: Wouldn’t it be nice to spend more time at the Palais?
This is what this story is mainly about. Needless to say that this wish was also granted – at an interesting price of water and work.

It started on Sunday, June 7th with a phone call from my next door neighbor Thomas. Upon seeing his name on the screen I was sure something grave must have happened. Why else should he call me, we exchange greetings twice a year when we happen to see each other…
„Peter, you’ve got a hose on the roof that is leaking.“
Said hose is to provide the garden shower with warm water, when the sun is shining. The hose is not of the newest making, but it shouldn’t leak, as I turn off the water main, when I leave the premises. Not this time, it seemed.
Quickly I arranged with Thomas that he would turn off the water main at the valve before the water meter. He informed me that the downpipe was clogged and the whole path behind the building was soaked.
As I found out later the valve behind the meter was broken.
Brief calculations would not ease my mind, as it could have been up to 400 m³ leaking from the hose…
So of course I drove there the next morning to check out possible damage.
Outside everything was wet just like after a good hard rain and I wasn’t too worried.
Upon opening the door I recognized that the humidity inside was high and entering the house (in the dark, all shutters closed and electricity turned off) gave me the nice surprise of stepping on a COMPLETELY SOAKED CARPET. *shlurp*
Next I tried to turn on the electricity but the fuse would blow immediately. So I opened the shutters first and got a glance at the disaster.
Not only a little bit of water, but LOTS must have gotten in, luckily the damage only concerned the living room area, kitchen and bedroom were dry.
It was easy to see why the fuse blew as one of the power strips was filled to the rim with water. As were all the bowls and basins.
The stove showed a new color, bright red flood rust. Wallpaper hung down completely wet and the floorboards were discoloured.

All the books – apart from the Harry Potter Edition – were bent out of shape and heavy with water, all tools from nailclippers to scissors rusty.
One part of the living room was completely dry though: The corner with the house connection for electricity, where the stereo and the TV are located.

After disconnecting the a.m. power strip electricity would work and though it was rusty and wet – the LTE router did too and I was able to send the first pictures from the disaster area to my loved ones… 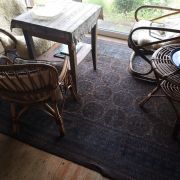 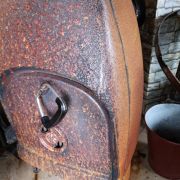 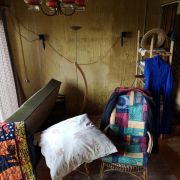 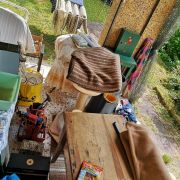 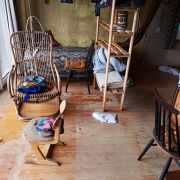 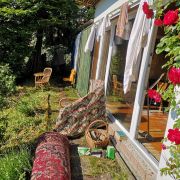 Of course I opened all the windows, took out the furniture as far as possible – small wonder it would start to rain in that very second.
It cleared up soon after, however, and the sunny day that followed helped with overcoming the first shock.
Next I rolled up the soaked carpets (the one in the dining area must have weighed 150kg at least) and dragged them outside. Old bedsheets, all the towels available (from the dry bedroom) were used to soak up the water on the shelf, on the floor, in the cupboards and the sofa. I placed all the books in the sun and hoped for the best…

I must have been working for 10 hours or so on this first day until I first allowed myself to rest awhile with a beer and a movie. :-)
Everything was stored outside on the terrace, I left the windows ajar and the carpets on the lawn, drove back to Frankfurt, collected provisions and ordered a drying machine, courtesy of recommendations from Jenny’s friends Rajko and Peter.

Luckily this one arrived within half a day and I headed back.
Thus began a time of having the dryer run 24/7 for weeks to come. The weather cooperated and a few warm days with lots of sunshine helped not only to dry books and furniture, but the living room carpet and I could put that one inside only a week later, increasing the level of comfort and feeling home by a high percentage.

The walls were still wet, though and the sofa took its time to dry, too. The quality of the sofa still amazes me, after drying and brushing it looked almost new and the upholstery as well as the folding mechanism are in mint condition. Given that the sofa is most likely older than me1 this is remarkable.
Jenny helped a great deal with frequent visits and shopping runs, so that I could stay at the Palais almost constantly throughout June. Without the combined effort I don’t think we would handled the situation that effectively.

As of today, most of the wallpaper came off and the walls are dry again. The floorboards look and feel terrible, this will be dealt with during the planned modifications next year. The shelf had changed color and structure, but that could be helped with sunflower oil – looks better than before now, also sunflower oil and scrubbing helped with the stove, which shimmers in a dull black again.

We lost some books of lesser value, a power strip was totally corroded, but the damage is only small.
The most expensive part will be the water and electricity bill this year and that one’s yet to come. I will see what I can do with the resp. companies.
Maybe they offer an idiot rebate or something like that.

Scratch a TERF and a racist bleeds. 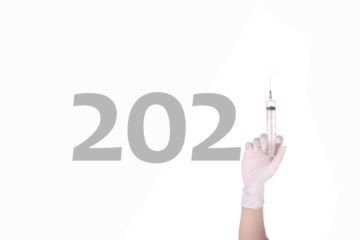 So, covid has given us all ample amounts of time to spend with a variety of things and matters, we…

Impressions of life at the cabin

I spent June almost entirely at Palais Sparta (aka cabin in the woods), for reasons I will explain in a…